A Month and a Day in the Opposition

It’s 10:30pm. My wife is sleeping on a station bench. With her head propped up on a bag instead of a pillow and my sweater spread over her face, she doesn’t have to explain anything. It’s obvious that despite her being only 17 years old, she prefers not see things. Perhaps she even doesn’t want to wake up at all.

I don’t want to sleep, so I keep repeating the maxim by Jose Marti: “It’s wrong to sleep if there’s work to be done.” Yet, I must admit that we are really exhausted. Only eight hours have passed since our last detention and over a month since we started to work as activists for the Eastern Democratic Alliance (ADO).

Being a young man who wants to remember all important moments spent with my partner, I always carry a notebook to be able to take notes. Thus, I have on me the whole chronicle of what has happened to us since the day I started being an activist, which is exactly a month and a day ago. I joined the ranks of activists thanks to my friend Rolando Rodriguez Lobaina, whom I have known since 2009.

I was initiated through several interviews, which I gave to radio programs broadcast by Barrio Adentro (Radio Republica) and Contacto Cuba (Radio Marti). They chose to interview me because I was one of the students who appealed to Ricardo Alarcon de Quesada, President of the Cuban Parliament, at the University of Computer Sciences in Havana in 2008, right after he finished his lecture on the importance of voting for the entire slate (“voto unido”). Living in a country with a one-party political system and a history of the State’s repressive policies and acts against those who nobly try to implement the concept of the Revolution, there’s not much that could surprise me.

Barely a month after I had given the radio interviews, I was definitely fired from the Ministry of Health, for which I worked as an employee of the General Teaching Hospital of Octavio de la Concepcion y de la Pedraja in the municipality of Baracoa. I worked there as the Head of the IT Department for 3 years and 7 months and I had never done anything that would justify a dismissal for indiscipline. Yet, I was fired on the grounds of leaving the office without permission. These breaches were recorded only 3 days after my radio interviews.

A few days later, accompanied by a friend of mine and my wife, I started a march from the Hatuey Park in Baracoa to the Guantanamo municipality with the aim to promote our cause and demand freedom of expression.

We set out at 2:30am, with no money or food. We walked over 153 kilometres, eating only guavas and green mangoes and drinking water from natural springs. We had cardboard signs hung around our necks with a text on the chest reading: “We want freedom of expression.” One day when we were crossing the region of La Chivera – it was 10:30am and we were about to enter the municipality of Imías, we were detained by State Security officials. The First Lieutenant and the Captain and a bunch of other officers keeping patrol transported us to the Municipal Police Unit, where we were forced to take off our cardboard signs with the word “freedom”. Then they drew up a report on each one of us, accusing us of disorderly behaviour. At 9:00pm, after we had been interrogated by some State Security officers, we were taken back to the park where we started the march. In its vicinity we were finally released.

So, we were back in Baracoa. Gradually, we have grown used to the fact that we don’t need to worry about the money for a return ticket.

Next day we set out again. This time not on foot but by bus. In Guantanamo we were welcome by Rolando and some other human rights activists. We spent a few days with them, walking around the city, fearing that we might be deported again. As usually, there were people who were giving us hard time – people working for the State Security, who were monitoring us and informing on us. During the afternoon, we sometimes played domino, talked about our struggle and the rough path to democracy. That’s how we were spending our time in Guantanamo, enjoying the only one privilege that cannot be taken away from us: the right to choose our friends.

After a few weeks we decided to go to Santiago de Cuba. However, our Jeep was stopped by the State Security at the exit from Guantanamo when we were passing the police checkpoint of Rio Frio. Without any explanation, they transported us to the Operations Department. We were denied information what would happen with us. The place exactly fitted the descriptions I had heard before: it was a perfect torture centre. They kept me locked in a brick cell until the next day, out of which I was dragged only to undergo the torture of an interrogation, a mandatory procedure in all detainees kept there. I was taken to a chilled room (I guess it was to frighten my spirit), where there was a counter-intelligence graduate (G2), armed to the teeth with Marx and Engels’ dialectical materialism (which I can’t tell from “ Fidelism”). He was the one in charge of examining me by asking tricky questions in order to find out how much was I willing to fight, or how much was I susceptible to becoming a snitch. On the next day, we were “repatriated” back to our home town of Baracoa.

A few days later, my wife got ill and had to go to hospital – to the same hospital where I worked before I was fired. I was denied entrance by the wardens of the clinic, who were acting by order of the hospital management. I begged them and tried to make them understand the reason why I was there, but all in vain. There was no way they would let me in. I wasn’t arrested that day. However, they did take me in a few days later when I took part in a march commemorating the first anniversary of the Cuban Resistance movement lead by Rolando Rodriguez Lobaina, general coordinator of the Eastern Democratic Alliance (ADO). We set out from the district of La Laguna, along with other opposition members, chanting anti-government slogans and demanding full freedom for Cubans. Hardly had we passed several blocks before we were stopped by numerous National Police and State Security members. They transported us to the local Police Station of La Punta. I was held there with other activists until noon of the next day. Later I learned that other activists were deported to Guantanamo.

Apart from these acts of repression I had to suffer the most terrible of ordeals: criticism from my own family. I was born to parents integrated in the Castro regime, members of the Communist Party. Even my sister is a member of the Young Communist League (UJC). Thus, my support for a democratic change in Cuba has caused numerous heated arguments within the family, which resulted in my having to sleep at places of my friends, at stops and stations, or even in the street. My wife’s experience was similar. Her parents kicked her out of their house right away. They didn’t want to get into trouble. Her mother is a doctor and she didn’t want to be withdrawn from her mission abroad because the family needed the money from the mission to be able to fix several things at home.

I might have plunged into the movement of peaceful resistance too fast. Yet, thanks to what I’ve lived in the last month I’m now able to understand the many hardships that all those who get up every morning (as I do) to fix the enclosure in which we have been forced to live. 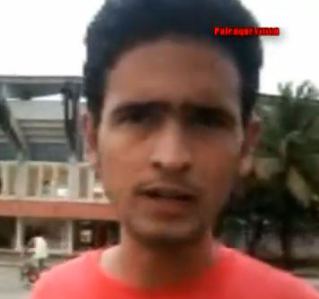